When Road Illumination Began: When Were Street Lights Invented?

Outdoor lights evolved from a dramatic, deep-rooted history. It later carved its way into the makings of the automatic solar LED lighting today.

A Street Light is used, not just for keeping the public safe in the dark, but also for heightening moods in romantic movie scenes. Ever wonder who invented the street light, when was it invented and how this lighting technology developed through the years?

In this article, we’re not only going to look into the earliest origins of a street light. We’ll also look at its present-day development into what is known today as an integrated solar street light.

Light has always been a major necessity thousands of years ago. Some say it dawned earlier than what is officially recorded.

The earliest remains of its historical existence was in 400 BC in Antioch. This was the time in Ancient Rome and Greece, where people used street lamps primarily for security. One is for preventing people from tripping over stones and another is for discouraging robbery activities. Oil lamps were usually placed in front of every villa.

Slaves had to carry out the lighting and extinguishing of the lamps. They were also responsible for watching these lamps.

Street Lights in the Pre-Industrial Era

In the 5th century BC, people in Peking (Beijing) used bamboo pipes to harness and lead natural gas from volcano leaks to their communities. Then they used this natural gas as fuel to ignite lamps to lighten up the pathways at night.

Goods made by hand was popularized in the Middle Ages. This is the time when automation and labor-saving techniques were out of the question.

Thus, street lighting was the painstaking responsibility of the lower class people or of the so called “link boys”.

Link boys were given torches for lighting. They’d round up the murky streets of the medieval period and escort people from one place to another.

Getting warmer, 1417 marked the first organized public street lighting system in London. The Mayor of London, named Sir Henry Barton, ordered people to place oil lanterns outside their homes at night during the winter.

In 1745 to 1749, newly-improved oil lanterns were predominantly used in Paris and in 1757, it was first introduced in the USA by Benjamin Franklin.

Benjamin Franklin designed his own version of London’s glass globe and it was used as the first street lamps in the USA. His design simply involved an oil candle enclosed within a glass housing. The glass housing is made up of 4 flat glass panels. Crevices in the bottom admits the air into the housing and the pipe above the fixture emits the smoke.

Gas lighting involves directly using flame to produce light, which was risky and unsafe for the lives of many residents.

In 1802, William Murdoch invented the first coal-ignited gas lighting system, placed along the premises of the SoHo Foundry. 5 years after that, London was illuminated with the first gas-lit street light.

In 1878, it was in Paris that the world’s first electric streetlight was invented.

Use of Incandescent Lamp in Street Lights

Arc lamps didn’t last long as they have flaws. One is that they produce high illumination and harsh light. Another is that they have shorter life spans. So incandescent bulbs replaced these arc lamps.

In 1879, Thomas Edison created and introduced the first carbon-thread incandescent lamp which was used as a lamp for street lights.

First Town to Use Electric Street Lights in USA

In 1880, Wabash, Indiana became the first town in the USA to use electric street lights.

Thomas was also the founder of the General Electric company. In the Wabash County Courthouse today, you can still see a Brush Light displayed at the courthouse.

The first street light in Los Angeles was a 150 ft street light high mast and a power plant was built near it to provide its electricity.

It was also designed to resemble the moon and equal its illumination.

It was in March 2, 1949 that the first automatic street light was lit in New Milford, Connecticut, USA. 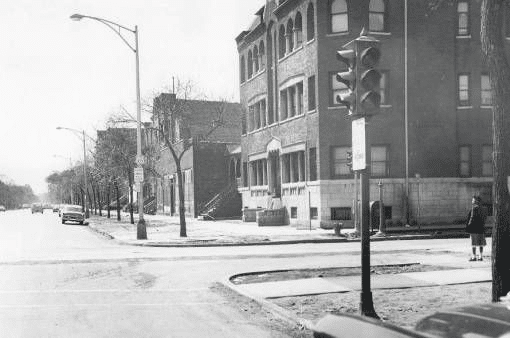 Digging further, an American inventor named Charles Fritts took credit in making the first solar cell and he is named the first inventor of solar lights. This was in the year 1883, when the solar cell can only reach a 1% efficiency. Today, solar panels can reach up to 22% efficiency.

It was in 1965 that high-pressure sodium (HID) lamps were used in street lights. These lamps provided more efficiency and good color rendition than low-pressure sodium lamps.There are still many HID lamps in existence today.

Currently, there are only a few street lights in the world that uses LED as its main light source. But the rate of adoption for this type of lighting is exponentially growing by the day.

If you’re looking for solar street lights with cutting-edge, green lighting components, look no further. HeiSolar provides this in the market in a variety of options.